In one of my most recent webinars on FXStreet, I talked about a key method for detecting when a trend is over-extended, which is to look for a climax or exhaustion reversal bar.  I had mentioned how from an order flow perspective why these exhaustion and climax bars tend to represent a high probability reversal coming based on the various participants and how they tend to trade trends.

Before I get into today’s forex reversal pattern article which will be an expansion and amplification of this, to recap – the key things you want to be looking for in spotting these exhaustion and climax reversal bars are;

Although there are other many subtle clues you can look for to amplify the possibility of these climax and exhaustion reversal bars, these are the three main ones you want to see in the price action to look for a trading opportunity.

The goal of this article will be to demonstrate a recent example of this, how you can trade these price action setups and what to look for from a price action perspective.

I will begin with an example of this in the DOW which gave a really good signal just the other day using this method.  Then I will get into the anatomy from a price action perspective all the key characteristics to identify these bars.  After this, I will discuss how you can trade these using price action with some simple rule based methods.

I will begin starting with the daily chart for the year in the DOW, the general uptrend, how it found a key resistance, and then look into the 4hr time frame to show how price action reacted after breaking the key level.

In the chart below, notice how price has a very stable relationship to the 20ema and dynamic support.  It rejects off of it three times before finally breaking below it.  But when it eventually does, it quickly jumps back above it, telling us buyers are still interested in driving this pair higher being happy to scoop this up on pullbacks.

Price action then forms a triple top just shy of 13300 which is the first time the entire year it needed three attempts to break a key level, suggesting there is possibly over-extension in the trend along with some sellers who are willing to hold a line the bulls cannot penetrate. 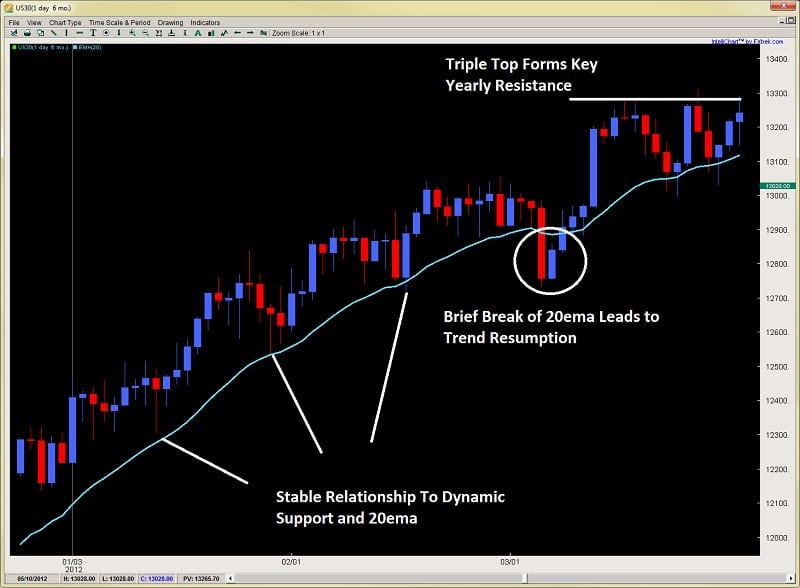 In the next chart below, starting with the top left of the chart, we can see how each pullback from the triple top (save the last one) created a pin bar off the 20ema (bars 1 and 2).  This was suggesting the buyers were happy to get back in on the pullback, but still could not break the key resistance just shy of 13300. Price then sold off aggressively for the first time all year, dropping over 500pts in about 6 days. 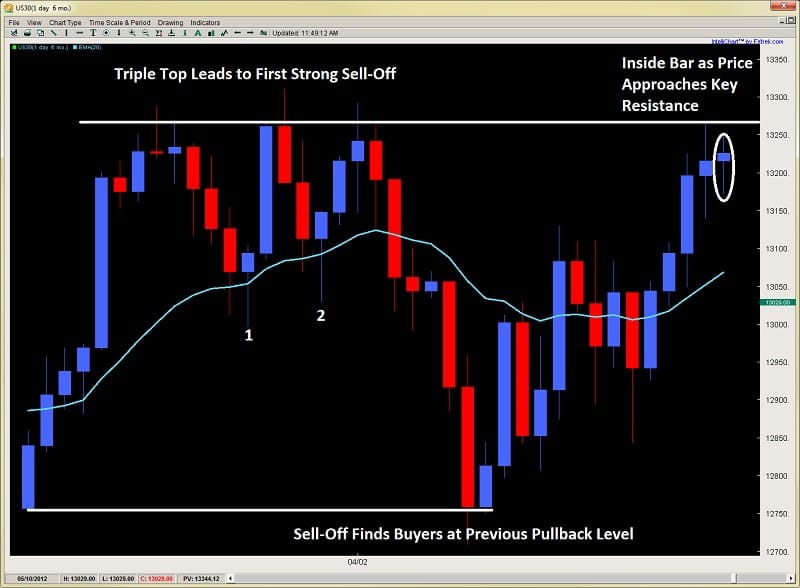 After finding support at a prior pullback level, price resumed the uptrend.  Notice how as it came up to the resistance level that formed the triple top, it formed a doji and inside bar suggesting hesitation for two bars in a row.

If the inside bar had formed after a strong bull bar, it would have suggested a little more strength and possible breakout.  But the hesitation from the day before, combined with the inside bar communicated two days of hesitation and an inability of the bulls to take out a key level.

Now on the next day, price does break above the key level forming a new high. But this ends up failing intraday, then pulls back below the resistance level along with producing a range bar.

One should notice how the rejection to the topside is equal to the downside suggesting false break as a) price failed to hold the gains, and b) there is an equal balance between the buyers and sellers.  Ideally, we’d have a very strong imbalance between the buyers and sellers when looking for a breakout, but we are not seeing that in the chart below. Anatomy From a Price Action Perspective of Exhaustion/Climax Bars

Now that we have highlighted a potential area of contention, I am going to zoom into the 4hr chart to show the exhaustion or climax bar specifically, break down the anatomy of it from a price action perspective and then talk about how you can trade this setup.

Beginning with the next chart, the first bar to concentrate on (which should naturally stand out) is bar 1 – the breakout bar which is the largest bar in the entire series.  Up to this point, we can see consistent buying all the way up to the resistance level with the bulls dominating price action winning 25 out of the 36 candles (69% bull-bear ratio) up to the breakout bar which is bar 1. Now if you remember from the very beginning of the article, an exhaustion or climax bar will generally mark long or over-extended trends.  These bars should have the following characteristics;

Why do these bars tend to be so large?

When trends are over-extended, they have had a lot of time to attract various players into the market, with the institutional players being first, the more advanced players who sniff out the new trend second, and the retail traders third.  The retail traders tend to be last as a whole because they need the greatest confirmation to enter a trend (generally).

By the end of a trend, as the retail traders get in, you have the greatest imbalance between buyers and sellers.  Those who have not profited from the trend will often chase it feeling like they have to make money on this move by buying breakouts instead of pullbacks.  Additionally, the institutional players will try one last push to get as much out of the market as they can – thus producing a climax or exhaustion bar.

Sometimes, this has an additional purpose of not just squeezing out the most of the current trend, but trapping new traders long into the market so when they exit, they can also look at reversing the market using those trapped to fuel the upcoming sell-off.

This is why these bars tend to be larger than usual and the largest in the series.  They will also occur at key levels, especially on breakouts which helps to further trap traders who bought on the break.  So hopefully this explains the basic anatomy of these moves.

In these circumstances, you have to ask yourself;
if the bulls were in control, how come they could not extend the gains?
Where did they go?
How come such a strong bar did not extend price further?
Why did sellers immediately push back?
Why did the resistance level not hold as a breakout pullback level?

All of these questions should have immediately come into mind because they held the key to whether this was a legitimate breakout or a false break.

But even if you did not ask all these questions, all the ingredients for the exhaustion or climax bar was in play telling you this was likely the end of the move.  Even after bar 2, notice how price then treated the resistance level not as support (continuation) but as resistance (false breakout).  Again, go back to the questions and the breakout just doesn’t add up.  So we have a textbook example of an exhaustion or climax bar.

How To Trade This Price Action Setup

Usually in an uptrend, I’ll look for a second attempt at the key level or a LH (lower high) before attempting to reverse a strong trend.  For those wanting a secondary entry, you’d look for a pin bar, engulfing bar or outside bar, then consider taking it in combination with the exhaustion or climax bar. But the price action should already show weakening ahead of the exhaustion before letting you know the offers will hold.

Most often with exhaustion moves, there will be a second failed attempt either at the key level, or producing the lower high giving you the final confirmation the exhaustion bar is in place and it is time to reverse.

Depending upon which of these situations will present itself will determine how I get in, but if I see any of them and they have all the ingredients, then I’m going to sell that looking for the market to reverse heavily since the trend has become over-extended.  Either it will retrace a good portion of the move, or it will consolidate before making a new leg (up or down).

Now looking at the chart below, although we had in bar 2 a solid bear bar, it barely took out 50% of the gains in the exhaustion bar.  Generally I’d want to see 60+% of the prior bars gains taken out before feeling like the bears are mounting a good attack and thus look for a reversal.  If I fail to see this minimum push-back, I will stand aside and wait for another trigger. Even though this threshold was absent, if you notice bars 3, 4 and 5, they all were being held in check by the level which was the key breakout level, suggesting the market was using this as resistance.  If it was a trap, price would not have made its way to the 20ema (so far away) nor kept producing small candles below this level (should have been above the level).  However, none of these were in place.

The most aggressive entry would be to sell after candle 3 or 4 closed.

They were weak candles after a strong selling candle just below resistance telling us the buyers were not pushing back with enthusiasm.  This would be one way to get in to this with a stop minimally above the highs of these candles and possible higher.

Another entry would have been to sell below the low of candle 3, or on a close below candle 3 with a stop above the high of candle 5 if it had made a break above the resistance level (which it did in this case, but will not always be the case).

The advantage of selling below the low of bar 4, or on a close below bar 4, is at this point, any traders who are trapped long are starting to exit their longs as the losses are starting to mount and increase since they are below their entry.  If candle 5 does not have a wick above the breakout level, then the stop has to go above the level minimally, but better to have it above bars 3-5 or possibly higher.

One conservative entry would be to wait for a breakout pullback to the 20ema treating it as resistance (not support) suggesting a new relationship to the 20ema.  There are also a few other methods to get into these reversal moves, but these are a few which should give you a good start to trade these setups on exhaustion or climax bars.

The goal of this forex reversal pattern article was to demonstrate from a price action perspective how exhaustion or climax bars can and will often represent the end of a trend and what key characteristics you will want to find in these bars.  We went over a really good example of this in the DOW showing how all the ingredients were present, what to look for and how you could identify them.  Then we ended by giving you a few methods to trade these price action setups and find either an aggressive or conservative entry along with what to look for.

I hope you enjoyed this forex price action trading article and found it useful in helping to identify exhaustion and climax bars and how to trade them.

Please make sure to comment, along with sharing the article by liking and tweeting it to pass it on.

For those wanting to learn rule based price action systems and reversal bar trading techniques, access to the traders forum, lifetime membership & more, check out my Trading Masterclass Course.