Inspired by watching The Dark Knight Rises on my recent flight, I wanted to write an article about trading and fear.  Of all the emotions that affect a trader negatively, fear would be at the top of the list. 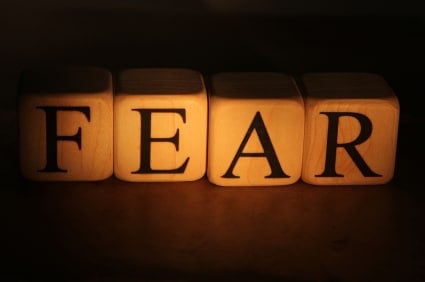 -Have you ever not pulled the trigger when your system gave you a signal?
-Have you ever been paralyzed by a series of losses (or one big loss) that prevented you from taking a trade?
-Have you ever made a poor decision because you were thinking of your last losses?
-Has the fear of losing money ever affected you from doing what you know would help your trading?

If any of these have happened to you, do not worry, you are not alone, and are likely in a large group of traders – a majority if anything.

Fear is a highly powerful emotion that has paralyzed many at one moment or another.  It has confused you, separated you from your intelligence, your wisdom, your ability to make a good decision.  This is true not just in trading, but also in life.

Of almost every mental, emotional or psychological issue I’ve encountered with traders, fear has always been at the root of the issue.

Fear of losing money, of hitting your equity threshold and trading too large, fear of failure, fear of being wrong, fear of making a mistake, fear of about anything you can imagine, with fear as the common denominator.

There are really three stages to fear for a person, especially in forex trading, which I will briefly go over, and talk about how to remedy your fears.

Being such a powerful emotion, at a base level, fear tends to cloud our judgment when experiencing fear on any level.  If we are not aware of it, or do not know how to deal with it, it will paralyze us, such as paralysis analysis.  It will actually reduce our mental and cognitive resources, forcing us to use a more primitive portion of our brain called the Limbic System (our most ancient brain).  You may have heard this as fight or flight, but really when fear takes a hold of us, we are separated from our natural intelligence in the moment we most surely need it.  We become the deer on headlights, frozen when we should act.  And this leads to confusion. By having no awareness of fear, or being run over by it, we take the path of confusion, and this leads to bad trading decisions.

Perhaps not pulling the trigger, even though our system has a signal.  Perhaps leveraging too little for being afraid of losing money.  Whatever the reason, fear at the basic level is of no use to us, and if anything at all – is highly damaging to our life, and our trading performance.

The only way to pass stage 1 of relating to fear, is to first become aware of it, then realize how it affects you. Once you do this, you have the ability to use fear, which is just a highly potent energy.

If you have trouble becoming aware of fear, there are several options, such as doing yoga, practicing meditation before trading, listening to binaural beats, or using a neurofeedback device to monitor your neural activity.  Any will work in their own way, but they will help you become aware of it to get past stage 1. Without it, you will forever be a servant to your fears.  But after this, you can use fear to your advantage which is the next stage.

Stage 2 – Using Fear To Your Advantage

Imagine being aware that you have the fear of failure.  It could, like in stage 1 paralyze you from making an important decision.

But…it can also be used to enhance your performance.  It can be used to your advantage to become a better trader.

In The Dark Knight Rises, Batman wasn’t afraid of dying, and this lack of fear of death separated him from an energy – an energy to do something beyond normal.  He eventually used this fear for his gain.

How Can Fear Be Used For Trading?

Imagine being afraid to fail, which in stage 1 means you are paralyzed.  But if you have the awareness of it, recognize your fears, you can use this energy (which is all fear and emotion are), to perform better.  You can use this to work harder, to do the things that build your skills, to practice your technique and system more, to put more hours behind the chart, to fear failure more than inaction.

Fear can be used to push you to the next level, and it is often fear which is at the root of someone who is highly driven.  They fear the outcome of failure, so they work harder to make sure it never happens.   In stage 2, fear is used as an energy to enhance your performance, to work harder than the next person, to not accepting mediocrity as you know how it sets you back.  Instead of being paralyzed and confused by fear, you transform it into a vehicle for your success.

If done correctly, it can bring you a tremendous increase to your efforts which can lead to success.  And although this may seem like a victory, it is a limited one – and certainly not the golden prize, which is the next stage.  Generally successful traders have fear, but they use this to their advantage and have built a successful trading mentality.

You always hear about fear and greed in trading, but this comes from the belief they cannot be overcome. This is shortsided and misunderstands the mind.  Fear can be transformed and something you are rid of. Imagine how you would be able to act in trading and life if you were without fear of death, without fear of loss, without fear of failure?

Imagine if you never had to deal with those energies, that all your intelligence and wisdom was directed to the problem at hand, to the moment?   You would never even have to take the side-road of using it for your advantage.  You could just act freely, uninhibited and without hesitation.  There would be nothing to protect, no future scenario you worried about, and nothing to lose.

Fear does not have to be a part of your life and especially your trading.

Just imagine what you could do without fear?  Imagine if  your resources were used to advance your trading and life?  Go over your trading journal and look at how many times you hesitated, with the trade ending up a highly profitable winner?  I’m willing to bet if you turn those non-trades into profits, or losing trades into winners, you would have a completely different account than you do today.

The good thing is you do not have to become a buddhist monk or a shaolin warrior to overcome fear.  With a little ERT training, and willingness on your part, fear can be transformed.  Your neural pathways can be reprogrammed towards success, intelligence and wisdom, all without fear.  It’s really just a question of will, effort and a desire to take things to the next level in trading and life.

On An Ending Note

Ask yourself where you are in your experience with fear and trading, and then ask yourself what you have done about it, and what you would do to turn the corner.  Ask yourself what are you willing to do to become a successful trader.  I have tons of students email me saying they will do anything.  But when the moment comes time and time again, they choose the path of fear, they choose to not take the risk which is what this game is about (financial and psychological). Our decisions and focus determine what we manifest in trading and life.  The question of how it ends is always within you.  In reality, trading is putting yourself in front of a mirror where you are given two choices;
-either become prey to your weaknesses, confusions and fears
-or rise to overcome them and empower yourself to live a different life

Regardless of which path you take, I hope this forex trader psychology article has provoked, challenged and inspired you to look at fear in a different way, and given you options to take your trading to the next level.

6 thoughts on “Trading and Fear”