I want to share with you some results and tell me if you think these would be considered professional grade, or highly impressive to say the least;
110% gain for 2011
124 Trades, 74 winners, 50 Losses
59.67% Accuracy Rate
Largest Win: $14,360
Largest Loss: $8,180
Max Win = 43% larger than Max Loss
Max Consec. Wins: 16
Max Consec. Losses: 6
Max Consec. Win Streak 2.66x Larger Than Max. Consec. Loss Streak
Largest Trading Position: 1M
Overall, this could make the grade for a professional trader.  In fact, I know many that did worse (a lot worse) then him and would be happy with his results.
The 4hr Charts
There has been a lot of talk and garbage being spoken about trading off the 4hr charts, how its trading as a hobby, how you’ll only be an amateur, how if you want to be a professional trader, you need to trade off the 1m, 5min, 15m, smaller time frames.  Ridiculous, but we are going to demonstrate why.
I’ve been wanting to show people the power of trading the 4hr time frames for a while. Although I have many students doing it, nobody is solely trading off the 4hr. They usually add the daily, or 1hr and have a mix of time frames and systems.  In comes Tony.
Do you remember Tony?  I wrote about him in the Pyramid of Trading article whereby I talked about him back in early Oct. At that time he was up 76%, and ended the year up 110%. Meaning, he gained another 34% in the last three months – impressive to say the least.
Tony had one thing going for him which was the best edge one could have – discipline.  Tony had very little experience, no business/finance degree, just a desire to learn, patience and discipline.  He came to me in late 2009 wanting to take some private mentoring sessions.
I taught him less than a handful of systems which he learned well and practiced on in 2010.  By the end of the year, he settled on his two favorites:
Price Action
& my Shadow System.
He learned his risk parameters, his style, how he wanted to trade, what was the best pair for him, then went for it.  He settled on trading the AUDUSD only on the 4hr time frames using those two (Price Action & the Shadow System).
I am going to show you his entire trading report, which averages about 10-12 trades a month with the max being 16 and the least being about 8.  You already have the stats above so lets show you the entire trade history for 2011.  I have covered his personal details and acct number to protect his privacy, but all the trading is there which you can see below.
Screenshot 1 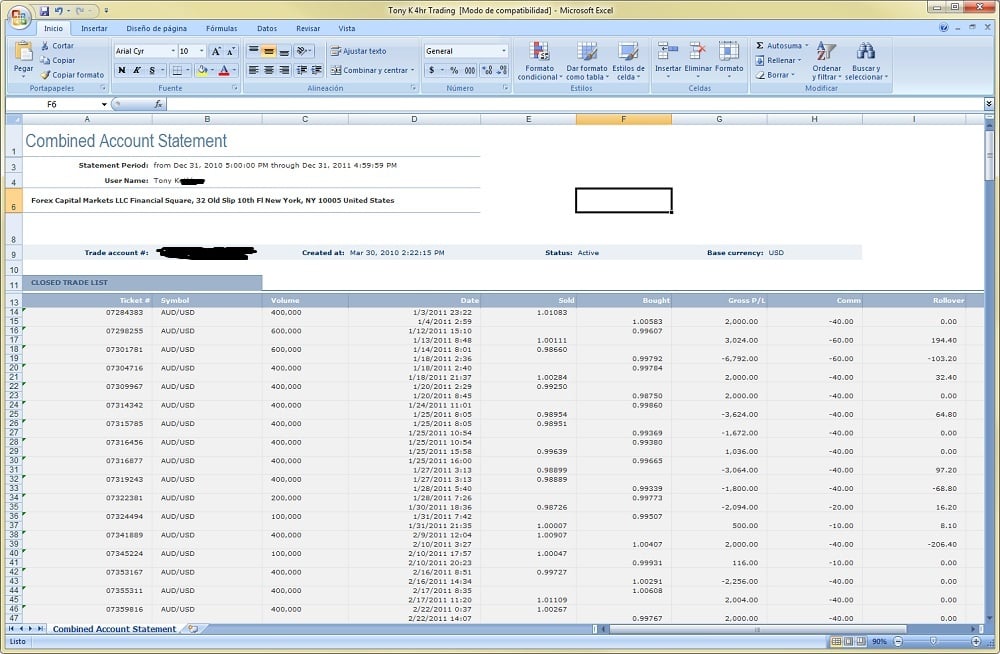 So there you have it, an entire year of trading.  To recap his performance;
110% gain for 2011
124 Trades, 74 winners, 50 Losses
59.67% Accuracy Rate
Largest Win: $14,360
Largest Loss: $8,180
Max Win = 43% larger than Max Loss
Max Consec. Wins: 16
Max Consec. Losses: 6
Largest Trading Position: 1M
This should finally put to rest the ridiculous talk and idea you only have to trade one time frame or smaller time frames to be a professional or highly successful trader.
All of this is thanks to Tony for sharing his results with me.  He traded only on the 4hr time frame for an entire year.  A lot of his trades were done in a day, but many went a few days, with several going 4-6 days holding time.  All he traded was Price Action and my Shadow System on one pair for an entire year. Disciplined, patient, and highly profitable.
How many educators show results from their students, especially of this caliber?  I believe I am one of the few, and Tony will not be the last. Maybe the next person is you – hopefully it is.
To also separate myself and end the debate, at the end of this year, I’ll show you audited results from an account I opened up just to demonstrate I am not just a good teacher, but a good trader as well.  I will publish the audited results from a professional accounting firm, on my site so you can all see I am the real deal.
I have no idea how i’ll end up for the year, but whatever it is, you will see it.  Even though my fund has an 8+yr audited track record (which should be proof enough), this will settle it, as it will only be my trading, only me pushing buttons, not anyone from my trading team, or any account from my fund. Just my own individual account opened just for this.  This should end the debate.  Hopefully then I can stop answering questions about my legitimacy, focus on trading, and teaching people who are serious about learning to trade successfully.
There are 3 things I live and breathe every day and have been for over the last 10yrs;
Yoga
Meditation
Forex Trading
I make my living and have been for almost a decade from trading.  I study it every day and every moment I can get a chance.  The only thing that is right up there with the three things I listed above is Teaching People to Become Successful Traders.  I’ve seen every kind of trader you can imagine (from time frame to profitability), and there is no one person who holds the monopoly on the truth of trading and the learning process.
And to the rest of you with open minds and a serious desire to learn, this demonstrates you can be a profitable and highly successful trader, regardless of your time frame, system or background.  With the right effort, discipline, and patience, you can be a profitable and successful trader as well.
Ode to the 4hr Charts and profitable trading.
Kind Regards,
Chris Capre
2ndSkiesForex.com
Twitter; 2ndSkiesForex

Use coupon code OCTOBER25TTM at checkout